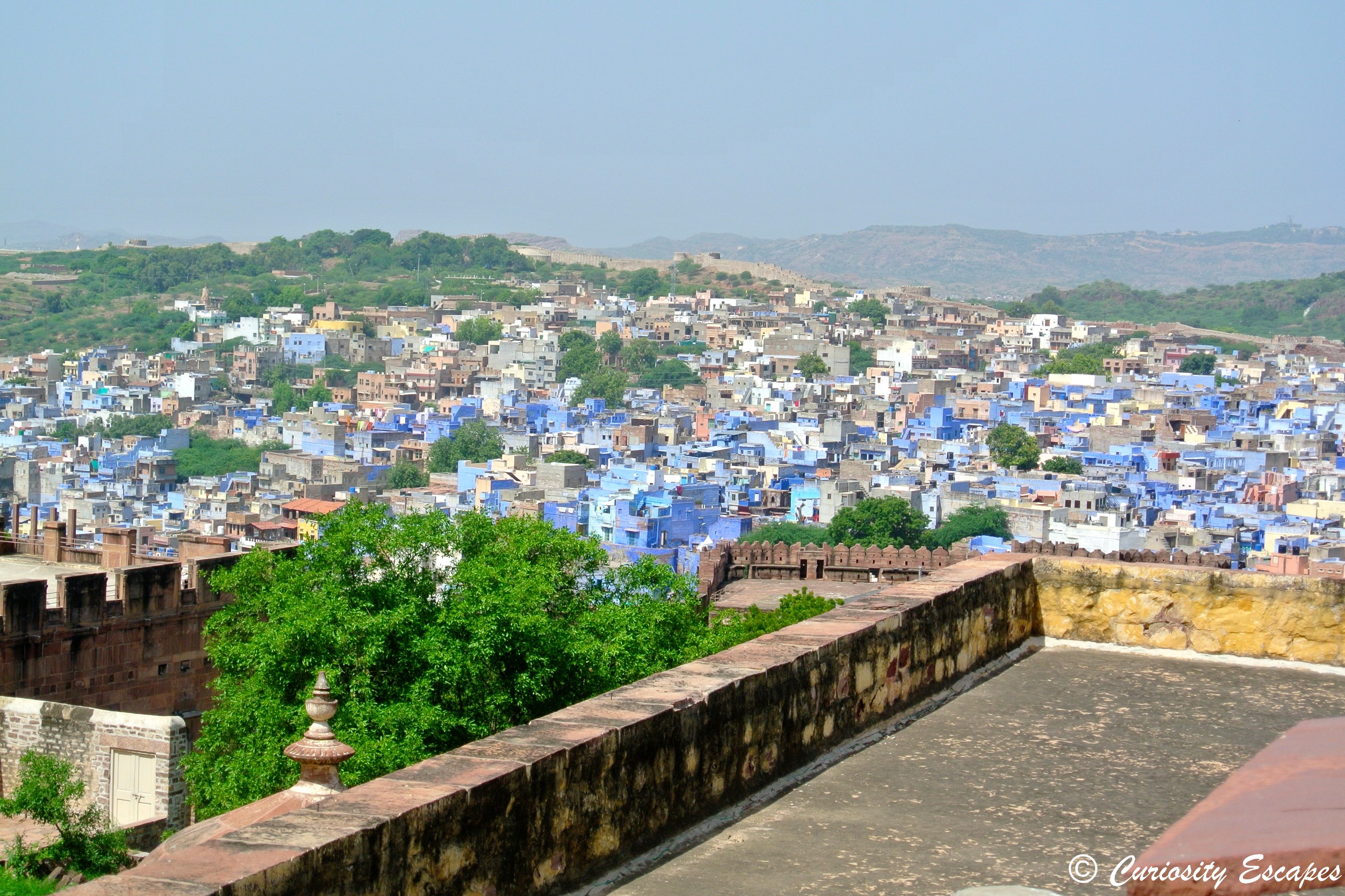 We continue our Indian adventures with one key-stop of the Golden Triangle on a Rajasthan tour: Jodhpur.

We’ve reached Jodhpur after stopping in Udaipur for a few days. Halfway there, do not miss the beautiful Jain temple of Ranakpur in the middle of the jungle as well as the Great Wall of India known as Kumbhalgarh.

Jodhpur is known as the blue city because many houses there are blue. In old times, it meant a brahman was living in there (member of a higher sacred caste), but with time, many more houses followed this color. I read somewhere that the blue color repels mosquitoes but also the heat. Which is more than useful here, in Rajasthan, in this desertic area. The consequence of it is a rather pretty view. Don’t you think ?!

We liked Jodhpur. We appreciated wandering in the Sardar market around clock tower (vestige of the British colons) and further on Manak Chowk, especially because we didn’t face harassment here or any trace of hostility. Sardar Market is a bustling place at the heart of the city. There is a lot of noise (like in India), honking horns, rickshaws, bikes everywhere, sellers of pretty much anything and everything but we enjoyed our time there. We didn’t feel overwhelmed because it’s in the open air and Indians didn’t insist on us when we said no. We appreciated taking our time and watching the lives of real Indians in a town much smaller than Delhi or Jaipur.

We found the culinary specialty of Jodhpur and I bet you will never guess what it is. It’s the omelet. Two street food sellers are making omelets in Jodhpur and each offer an incredible number of variety. It’s a very good deal if you want to eat for cheap. But what we preferred in Jodhpur were the restaurants, especially for their night view on Mehrangarh fort from their rooftop terrace.

By the way, apart form the market, the fortress is the only attraction in Jodhpur. But it was a good thing for us to have a more relaxing stopover where we could take our time to wander in the city, observe the people and the houses, instead of jumping from one visit to another.

Let’s speak about this fortress. It is very impressive. It is located 120 m above the city and its walls can reach up to 36 m high. With these figures, the fort seems impregnable. What to expect during the visit: a museum with pretty designs of elephant carriages (howdah), Rajput art, weapons and rooms in the old palace. Those rooms are stunning with carvings, ornaments, paintings, gildings… All the stuff we like to see in Indian palaces and temples.

I would also like to inform you that it is possible to go zip-lining above the fort with Flying Fox (next to the fort entrance). I really wanted to do it but Paul wasn’t very reassured by Indian safety standards. On second thought, I don’t regret it because it was too expensive (more expensive than a 2-day 1 night camel safari). But if you’re up for it, I only read good reviews on TripAdvisor.

In conclusion, we’ve really liked our stay in Jodhpur. We liked the city, the architecture, the general atmosphere and the fort. So don’t hesitate to add that city to your itinerary.

Hotel: We’ve spent two nights at Discovery Guest House but I cannot recommend it to you (except the restaurant). Our room had no window, the bathroom was invaded by ants and the toilet flush didn’t work. I had selected another guest house from the Lonely Planet, but we never found it. So we took a random hotel but that was a mistake.

Do you want to visit the blue city now ? What other site or activity did you do in Jodhpur ?

Khajuraho: Do not miss the Eastern Group of temples

This post is also available in: FrenchLast year during my trip to North India, I finally made one of my dreams come...

Khajuraho: Do not miss the Eastern Group of temples

This post is also available in: FrenchWhen I was preparing our itinerary for our trip in North India, there was a...