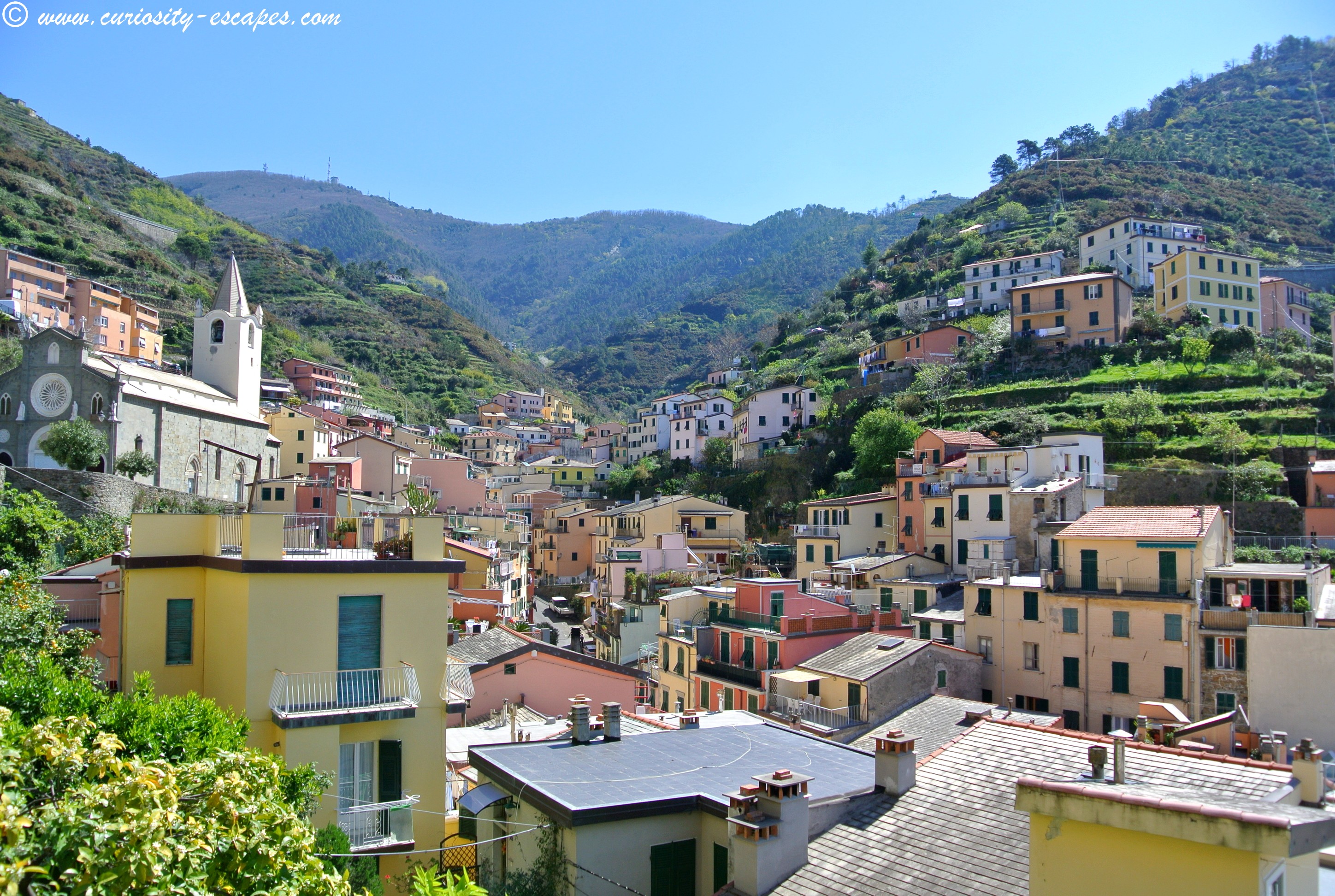 You read in my previous post about all the fun things to do in the Cinque Terre, those five Italian villages that were built on the edge of a cliff. But today I’m going to give you my real feelings about the place.

We see so many photos of those villages on Instagram or Pinterest and it is utterly flabbergasting. We suspect those photos have been retouched, colors have been enhanced, filters and effects have been added. I don’t really know what I was expecting from the Cinque Terre, but after my visit, I have mixed feelings about the place.

Don’t get me wrong, I’m very glad I visited the Cinque Terre. I made my own opinion about the place. But now, with mass tourism, I reckon the place has lost its charm, its authenticity. Moreover, everything didn’t go as expected.

Here are the reasons for our inconvenience at the Cinque Terre. Nothing disastrous though:

Crowds in April : We had a wonderful sunny weather and even got the chance to get a tan in April. We purposedly visited in April, at the beginning of the week in order to avoid hords of tourists from the weekend or from July and August. Even then, it was so overcrowded. Since the villages are so small, there is a high concentration of people at the same place. That’s too much for me.

Even on the hiking trail, we encountered traffic jams. The trail is very narrow and very steep. It is not a one-way hike, people can come from both ends and we regularly met people coming from the other way. It was already no fun because we had to walk in a single file but whenever we met other people coming from the other end, the whole traffic was stopped to let them pass. As an amateur photographer, I stop quite often to take pictures. I let people pass me so I wouldn’t get in their way. But when I join back the line a few seconds later, I’m being slowed down in my hike by those people I let in front. That’s definitely not the fun you are expecting when going on a hike.

That being said, the scenery from those hiking trail is just AMAZING and you shouldn’t miss this experience. But I’m warning you, and you should thoroughly follow this advice: DO NOT GO TO THE CINQUE TERRE BETWEEN JUNE AND AUGUST. You’re going to hate yourself, it’s going to be so unbearable. Given how it is in April, I can’t even dare imagine how it must be in the high season.

As a comparison, I found there were far less people at the Italian lakes. That’s putting it mildly. But I guess we feel that way because the region of the lakes is more spread, therefore people are scattered around the lakes instead of being packed in small streets.

Few trains : Despite the high number of trains that appear on the schedule we are given, I felt there weren’t that many trains (at least in April). One train every one hour and a half, that’s not enough. If you miss the train by a few minutes, you’re gonna have to wait for over an hour. It’s too long. And while you are waiting for the train, the crowd waiting is getting bigger and bigger. You’re gonna spend the journey standing up. Moreover, you can’t put the situation into perspective by saying: “It’s OK, we’ll walk !”, because you’re gonna read my next point: the trails are closed. Another tip: read carefully the schedule: sometimes the trains do not stop at each station and are headed directly to La Spezia or Levanto.

Closed hiking trails : We wen to the Cinque Terre for the sole reason to link each village by hike. How disappointed we were when we found out that the trail that links Riomaggiore to Manarola and Manarola to Corniglia was closed. That includes the most famous Via Dell’Amore, the most beautiful part of the Sentiero Azzurro.  I sensed that one trail might be closed but I certainly didn’t expect for 50% of the whole park to be shut down. Between those villages, there is no other choice than to take the train.

This situation lasts since the 2011 floods. My advice for people who visit the Cinque Terre as a hiking destination: be prepared to be disappointed and have a plan B. That could imply using the secondary trails, but these ones do not run along the coast and are a lot longer in distance. Therefore, you should plan a stay of 4 days to link all five villages instead of 1 or 2 days.

Poor indications : Precisely, I had planned on hiking a few portions of the secondary hiking network in order to avoid the crowds and to visit some of the Cinque Terre Sanctuaries all the while enjoying an even further panorama: the Santuario della Madonna di Montenero (in Riomaggiore) via sentiero n°3 and Santuario della Madonna di Soviore (in Monterosso) via sentiero n°9 (we’re supposed to see Corsica).

In Riomaggiore, we turned around over and over in the village until we finally found a sign for the sanctuary but not even 100m later, we face a huge construction site in a very narrow street. Men are working on a scaffolding, it’s completely blocked. We try to find a back route, we even find a secret beach behind the Marina but we see absolutely no signs of any access to hiking trails. We turn around unsuccessful and catch the train for the next village.

In Monterosso, same story. The streets are pretty and full of local shops and restaurants but sentiero n°9 is nowhere to be found. We fall back on the Sentiero Azzurro, which is indicated and miraculously open this day.

That’s two failed attempts for the sanctuaries, add to that the Sentiero Azzurro which is over 50% shut down. That was not a good day for hiking.

That being said, if you do manage to find the departure of the secondary trails, I’m sure it’s the perfect solution to escape the crowds and enjoy even more the place, like we did at the Italian lakes.

I hope all this inconvenience did not discourage you from visiting this place. Like I said at the begining of this article, I’m very glad I could walk along this National Park and observe those typical mediterranean villages, which, we have to admit, are fascinating.

Despite my bad experience with the Cinque Terre, two of the five villages really caught my attention :

Vernazza : to me, Vernazza is the most photogenic village. I loved taking pictures of it from above at different places. The village unveils its charms to you gradually during the hike. Vernazza is known as THE village to photograph during sunset. While walking in the villages, you are still head over heels. The streets seemed more colorful and more charming than in other villages. They also seemed more inhabited, therefore more authentic. But maybe that’s just me.

There are a lot more details that make us love Vernazza: its port is pleasant to just sit and enjoy an ice-cream while watching boats coming and going, we love its’ small natural cave that leads to the beach, it makes it a secret place, we love that octagonal tower which fits perfectly with the rest of the architecture and the castle in ruins overlooking the port and standing out from above the Sentiero Azzurro.

Manarola : We encountered less tourists in Manarola and we found easily the Sentiero n°6 (secondary trail) which leads to Volastra and Corniglia. Maybe that’s why Manarola ended up being my favourite village of the Cinque Terre. Trail n°6 makes us walk along the vines overlooking the Mediterranean sea. The view is absolutely sublime and as expected was far less crowded than the Sentiero Azzurro so the hike is way more pleasant. We were in Manarola around 6 pm when the sun was still very high but ready to set. So we didn’t get orange colors but we could still gaze at those beautiful golden reflections on the sea and between the vines.

What’s really cool while reaching trail n°6 is that it makes you walk past inhabited streets and see churches which are not part of the typical tourist path. We got the chance to observe a small group of locals who just got out from the evening Mass and were talking in front of the church.

In Manarola, I found the authentic experience that I was looking for when coming to the Cinque Terre: locals living their daily lives without having to endure tourists, breathtaking landscapes, a village atmosphere. There are still a lot of tourists in Manarola, but only in the main streets down the village. Is it because we were there at the end of the day ? Had the majority of tourists already gone back to Rome and Florence ? We’ll never know but these are the reasons why I loooved Manarola.

Which is your favourite village of the Cinque Terre and why ? Did you have to deal with crowds of tourists ? If you are planning a trip to the Cinque Terre, what are your expectations for this region ?

What to do in the Cinque Terre ?

This post is also available in: FrenchLet’s start with the question I was most asked during my stay in...

This post is also available in: FrenchFollowing my Italian roadtrip from April, it didn’t take long for me to...