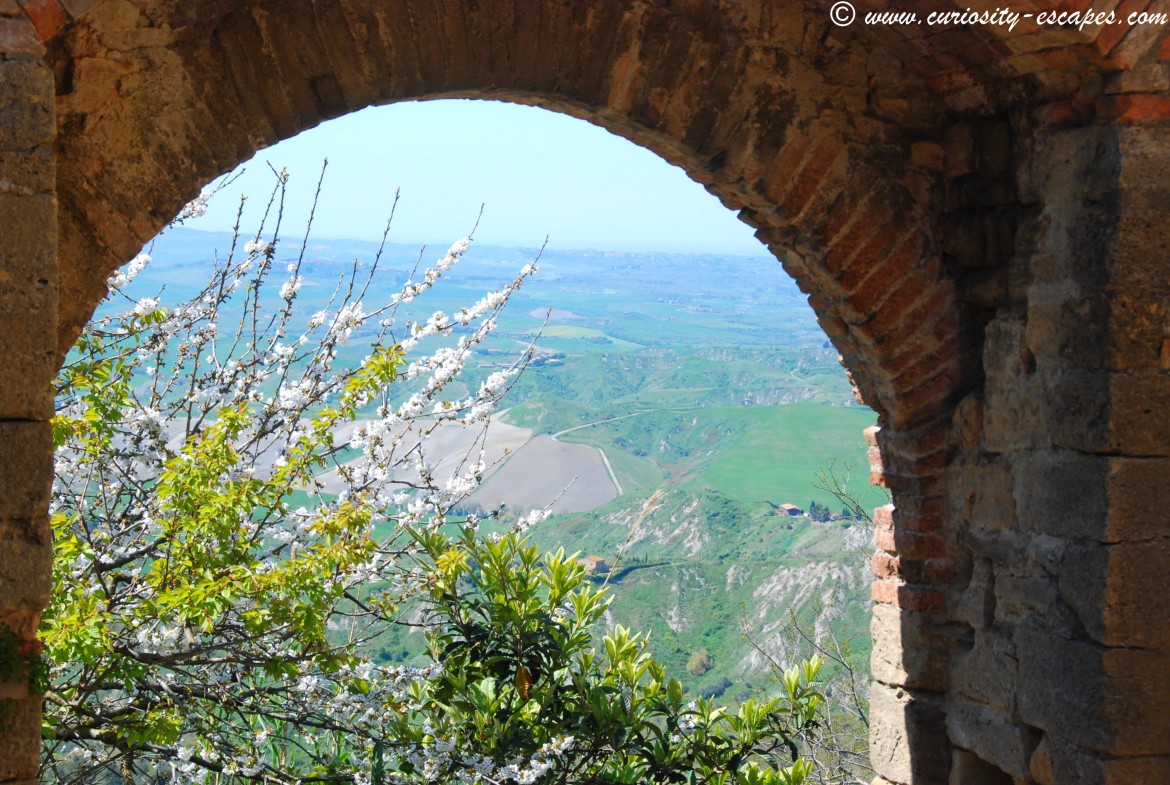 Following my Italian roadtrip from April, it didn’t take long for me to share my experiences and discoveries with you. We hiked along Liguria’s coast and wandered in Tuscany’s countryside. However, it took me a while to write this article about Volterra.

I liked Volterra. It met my expectations, I wasn’t disappointed. I loved its charming narrow streets, its typical tower on the main square and its imposing ancient buildings as well as its local shops with craft objects and gelaterias…

So if you liked it, what are you waiting for telling us all about it and showing pictures ? For the simple reason I wasn’t inspired. There was a problem with this town. Just after visiting Volterra, we found ourselves face to face with Italy’s best kept secret town: Monteriggioni. We immediately fell in love with this medieval town perched on a hill and entirely surrounded by city walls. So you can understand why we quickly forgot about Volterra.

However, Volterra still deserves a stopover during a roadtrip in Tuscany. It’s a nice getaway you will enjoy thanks to its history and laid back atmosphere.

The town became famous following the success of the Twilight books and movies but I found it didn’t get a big head from it. The local shop owners didn’t even fall in the trap of selling derived products from the movies, which I thank them for that. This way, our visit remained authentic and enjoyable.

What I disliked about Volterra: the cars. It’s a fortified city so there shouldn’t be any cars (except inhabitants or delivery trucks). But this was not respected in Volterra or the number of people allowed to enter with their car is way too high. We were in a pedestrian street and it was an endless procession of cars and scooter-trucks. We always had to pin ourselves against the wall (did I mention the streets are narrow) to let those vehicles pass. That was so annoying, especially considering we are in a PEDESTRIAN street !

On the bright side, we really enjoyed wandering in the streets, we walked by every single street at least twice. We visited cathedrals, baptisteries and churches… and just enjoyed our time there.

We’ve visited the Museum of Torture. That’s an interesting museum which do not have any animations or anything but that’s for the better. It would be too creepy otherwise. I mean it is less explicit than what we can see at the Tower of London. The museum consists in numerous signs describing the torture technique with an ancient drawing or diagram pined on the wall. You get shivers just by reading the description. Sometimes, but rarely, a specimen of the torture object was on exhibit. I was really impressed by the high number of torture techniques. We can see a lot of them in action in the Game of Thrones show for example.  It’s also utterly shocking to learn that a few techniques are still in use nowadays. I’m thinking about current conflicts where French and American armies are in the field. We are reminded of certain movies we’ve seen. The last one I have in mind is « American Sniper ».

To continue on a better note, we found a nice spot at the other end of the town where you can see the Tuscan countryside afar and a small roman theater below.

Anyway, you should be touched by Volterra. Rich of history and culture, this getaway will be peaceful and will give you a change of scenery. But if you really want to make a leap into Italian history, you should then drive towards Monteriggioni, about 40min from Volterra. Get ready to fall in love with Tuscany. I don’t think I need more convincing about this village, but just in case, read my article about the most beautiful village in the world: Monteriggioni.

We slept at Camping Le Balze in Volterra, not inside the city fortifications but in the new town. This way, no stress about where to park. We left the car at the camping and joined the old centre on foot. Check-out the view from our tent. Priceless !

For those coming to Volterra by car, you will need to park outside of the city. We see a big parking next to the roman theater, I guess it’s a paid parking. To reach this parking, you must reach the town through Porta all’Arco. Other parkings are available at the other city gates.

This post is also available in: FrenchI didn’t make it up. Such thing as the Great Wall of India really...

I went to Expo Milano

This post is also available in: FrenchI’ve always dreamt of visiting the Universal Exhibition one day. It was...